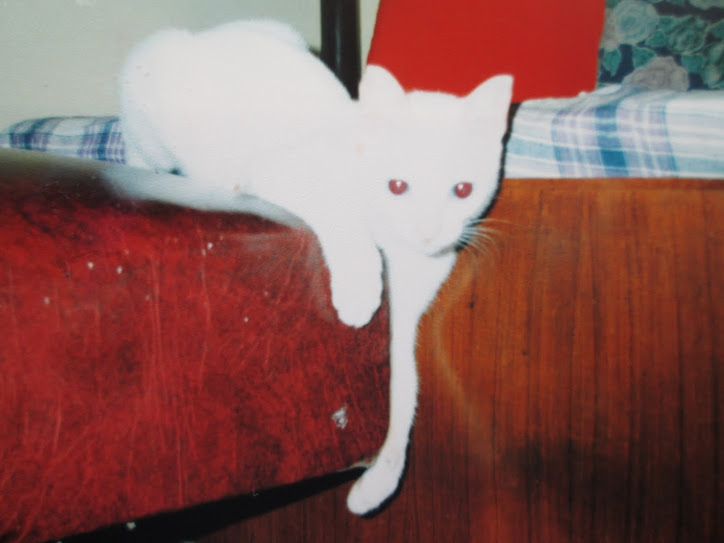 "Trixie" a "BELIEVE IT OR NOT CAT FACT"

This is in memory of my albino Siamese mix Trixie. Trixie’s entry into our house-hold was pure "DESTINY". Normally, whenever I visited South Mumbai always made it a point to visit "Crawford Market pet section" and was also facially known by most "Pet sellers" due to my familiarity and knowledge of animals and birds. On Thursday (20/7/1995) made a similar visit to Crawford market and one of the pet dealers asked me if I wanted kittens free of charge as they were sick and he couldn’t care for them, as tragically, a majority of "Pet Dealers" operate the "Pet Trade" purely for "Monetary purposes" and not due to an affinity for "Animal welfare" or fondness for animals.At least this "Pet dealer" offered me kittens instead of allowing them to die in their cages as is a daily occurrence at most "Pet shops" with a variety of animals and birds, one of the "Discounted Financial losses" of the "Pet Trade Industry"."Lucky" our prized dachshund had expired recently and our household always had a pet since my child-hood hence I thought of taking one of the kittens as a sort of "Animal social service" besides filling the vacuum created by Lucky’s demise. I purchased a parrot cage from the pet dealer and put "Trixie, the weakling kitten" into it and came home fearful of a shouting from mum as ultimately parents would have to care for it since most of the year I was away from home on board ships.After a bit of shouting at me Trixie was finally excepted in the house-hold and I first gave her a bath removing the fleas and later to Dr. Rajhansa’s (our personal veterinary physician) animal dispensary at Shivaji Park.Trixie was inoculated and recovered beautifully from a sickly kitten in Crawford Market to a photogenic cat. Trixie was house-trained by me and used a toilet for her daily relief akin to dogs and I was also impressed by her intelligence and cunning but alas being totally in the companionship of humans made her unfit for social cat interaction, in fact, she got scared on seeing other cats.
"TRIXIE"- THE CAT THAT DEFIED DEATH THRICE!Strong contender for a "GUINNESS BOOK OF RECORDS CERTIFICATE" of the quote "A CAT HAS 9 LIVES". A Survivor of "3 FATAL DEATH ENCOUNTERS" during her lifespan of 12 years. Listed in chronological order:A) LIFE NOS 1 :- Absolutely proven in Trixie’s case, a "Ripley’s believe it or not". Sometime in 2002 while I was away at sea on employment received the news that Trixie had stopped taking food and was only on a diet of water! I took this news casually thinking that cats normally tend to avoid food for a few days due to indigestion but on arrival home was shocked to see Trixie turn into a living skeleton and absolutely paranoid.She avoided coming into the open and was totally scared in her behavior besides shunning food for the past 1 month being only on a diet of water! I immediately rushed her to the S.P.C.A hospital at Parel (Mumbai) and the diagnosis was of a feline virus. The veterinarian injected her with medication and she quickly recovered in a few days and within a month was back to her normal self. LIFE NOS 2 :-Another episode of Trixie’s "cat-o-9-lives" happened during mum’s terminal illness when mum’s sister Aunt Juliana D’silva was staying at our residence assisting mum in her daily routines as the cancer was gradually making her feeble and at times incomprehensible.

Our residence was in total chaos due to mum's medical condition and dad at the age of 79 was feeble and neurotic at times due to mum's condition.One day the house door was left open and Trixie sneaked out of the house unwittingly and no house-hold member realized her absence until I arrived home and found her missing as normally she usually came out of her hiding places in the house to greet me on calling her name.I realized that she might have wandered away from the house and searched all over the building grounds including the terrace and surrounding locality.
Trixie being an albino cat is easy to identify, hence I told the building watchmen and realized that since Trixie was home bred she wouldn’t survive in the streets since other cats would kill or chase her, besides she was never used to eating waste food.The next morning the watchman told me that he saw some cats fighting at night and one of the cats was an albino and hiding below one of the cars. I quickly took a cloth piece and started searching for her near one of the cars and sure enough she was hiding under the engine utterly scared and famished as well as vicious. I managed to coax her to come out and finally caught her and took her home. This was the second miraculous survival for Trixie and since then we are always careful with the house door. LIFE NOS 3 :-Trixie has developed a strange sickness since mid-October 2006, a puss-like discharge from her vagina besides her stomach swelling, which seems abnormal and akin to a pregnant cat. Trixie is approximately eleven years old and into "old age" hence intensive veterinary treatment at this stage in her life would be akin to torture. Besides her temperament is akin to a wild cat, totally uncontrollable by humans including house members. Trixie’s immunity towards pain can be gauged by her normal behavior in-spite of her undiagnosed disease which I hope will self-heal as is the case in most animals, especially cats. Cats unlike dogs have a great tendency to withstand disease or infection hence the true proverb, "A cat has 9 lives", unless it is a virus like the one she contacted many years ago.Visited S.P.C.A hospital at Parel (Mumbai) after a few months on 20/11/06 (Monday) where I normally walked the stray dogs in the dog ward, a form of "Self medical therapy" as well as "Animal social service" after undergoing terrible personal upheavals in my social and professional life. Animals and wild-life have been my source of relaxation hence a succession of pets in our household having owned two dogs; "Blondie" a Spitz/Pomeranian mix (1975 to 1984) and Prize winning dachshund “Lucky” (1984 to1993). I happened to meet Dr Ashish.Suttar overall-in- charge of the animal hospital and casually consulted him about “Trixie’s” ailment. The diagnosis was lethal and seems it’s a common ailment in both female cats and dogs, the only solution being an operation which is not possible for Trixie since she is old besides being of a bad temperament. On consultation with the hospital veterinarian i was told to give her oral medicine to avoid an operation. Gave her oral treatment of anti-biotic medication (Taxim-0 100mg dt tablets and Metrogyl syrup), which was difficult to administer since she refuses to eat yet somehow we have managed to feed her some Taxim powdered tablets in her food. Just hoped for the best healing process otherwise Trixie could face an inevitable slow death. Trixie's miraculous and medically unexplained self healing as explained by me could be a source of future "Self healing therapy" for "Terminally ill cats" about to be euthanize or undergo life threatening surgery.Post "Self healing recovery", Trixie has become a glutton always fighting for food since we keep her on a 2-meals/day diet of mincemeat and cooked rice. Her stomach doesn't bloat anymore nor the foul smelling stench, uncontrollable urination being her only sickness at present. Her "Meow's" when being approached to be given food by Sabina is eerily "Human", something i never heard from her in the last 12 years, besides she is totally unafraid of her, a sudden change in feline temperament.As on 16/7/07(Monday) Trixie is as fit as any cat half her age, something unexplainable and paranormal in animal behaviour and cure. Trixie succumbed to her prolonged illness on Sunday (5/7/07) between approx 2200 to 0100 hrs at home near to Dad's bed. The strange case about this disease is that she made a full recovery and again suddenly succumbed abruptly to the illness. Her physical deterioration was rapid within a span of 2 days beginning with refusal to eat food and excessive intake of water finally de-generating into total collapse of physical equilibrium.Buried her today morning (Monday 0930 hrs approx) at the sea-face beach near our house at Prabhadevi where my previous two pet dogs were also buried. As mentioned, since our household is minuscule and me being a bachelor our pets are our companionship and "Stress relievers", hence Trixie's absence is immensely felt. Surely, with the passage of time the loss of our pet cat would be firmly entrenched in my memory and as usual i would get a pet to be my "stress reliever" as well as companion.Lord Tennyson had said,"Its better to have loved and lost than never to have loved at all". "Trixie, you remain in our memories and thanks for the joyous moments you provided our house-hold."

READ THE DAIRY OF THE CAT THAT LIVED ITS 9 LIVES:- CAT TRIXIE. 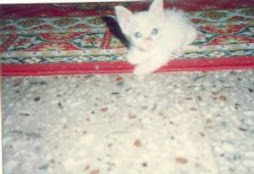 Trixie as a adopted kitten after veterinarian treatment

"Trixie" along with parakeet "Mittoo" 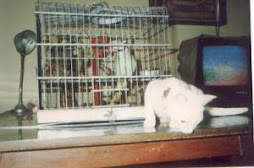 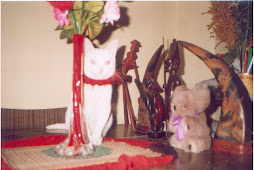 "Trixie" posing as a "cat Model" on the house table. 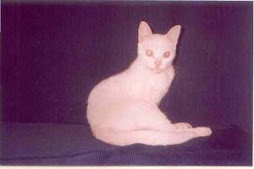 Cat trixie at home in Mumbai.